The Amato Opera's home was at 319 Bowery in New York City near the famous rock club CBGB. It was the smallest opera theatre in the world and the only self-sustained in America.
A former Mission House and restaurant supply store, which was converted into a theatre with rehearsal and storage space, 107-seats, a 20-foot stage and a tiny orchestra pit.
The company was founded in 1948 by husband and wife team Anthony (July 21, 1920 – December 13, 2011) and Sally Bell Amato (September 27, 1917 – August 16, 2000).
Tony Amato acted as artistic director, choosing the repertoire, rehearsing and conducting the operas.
In the early productions, he often cast students from his opera classes at The America Theatre Wing, where he was the Director of the Opera Workshop.

There was no admission charge for the company's early performances, because “Union Workers” rules prohibited it. Tony Amato to open the doors started having "Free Opera". For 9 years, during the intermission the Amatos would "pass the hat around" for contributions. Sally acted as costumier, ran lights and box office and managed publicity and business matters. Under the alias Serafina Bellantoni, she sang in productions for over fifty years.
Over its 61 years in existence the company maintained a policy of keeping prices low for the American working class and to make sure to spread Opera and keep it affordable.
Their first production, Rossini's The Barber of Seville, was mounted in the auditorium of Our Lady of Pompeii Church at Bleecker and Carmine Streets.
The following week, the company produced Cavalleria rusticana and Pagliacci. The company used many other locations in its early years, including the Kaufman Auditorium of the 92nd Street Y, the Fashion Institute of Technology, and Washington Irving High School auditorium.
In 1951, the company moved into its first permanent home at 159 Bleecker Street. In its new 299-seat theatre, the company gave four performances during nearly every weekend of the year. The company's repertory soon spanned 21 different operas, and it gave over 1,296 performances at the theatre. The Bleecker Street theatre closed in 1959, but the company continued to perform at other venues, including The Town Hall and 126 West 23rd Street.

Amato found a new permanent home in 1964 in a four-story building on the Bowery.
Each season included five or six different operas, typically a mix of comedies and tragedies, and the repertory eventually expanded to over 60 operas. Each opera ran over five weekends, and the company used multiple rotating casts. Amato also mounted Saturday morning Opera-In-Brief performances. Aimed at children, the Opera-In-Brief performances are full-length short operas or abridged versions of longer operas interspersed with narration.
The famous Metropolitan Opera Theatre used to donate costumes and props to the "small but grand" theatre, like Maestro used to call it.
The wonderful scenography painted by Richard Cerullo were appraised often by the New York Times Magazine. Same for the productions at the theatre where many articles were written by American and around the world magazines.
Amato Opera closed after its last performance of The Marriage of Figaro on May 31, 2009.

In 2010, Amato published a book about the company called The Smallest Grand Opera in the World.

A book of this documentary "An act of Love, Amato Opera" [Large Format Landscape, 13×11 in. 106 pages] is available on request, please contact me for any info.
Read More 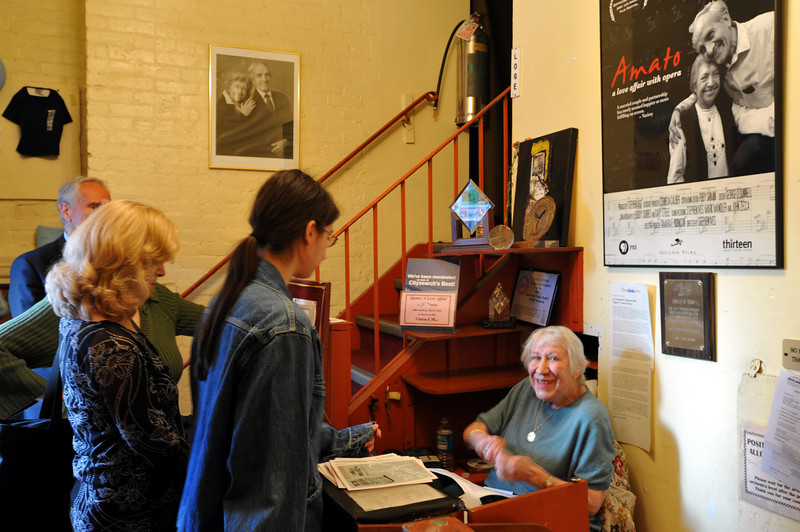